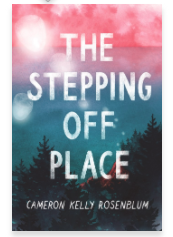 This Wednesday at noon, the Portland and Lewiston Public Libraries will jointly host Pond Cove Librarian Cameron Rosenblum to discuss her debut young adult novel, The Stepping Off Place. HarperCollins released the book released in July and it hit Maine’s Best-seller List two weeks later. Cameron’s is the kick-off event for the libraries’ virtual author series focused on teen mental health called Read Your Mind. Woven together in multiple timelines,The Stepping Off Place  “explores loss, futility, honesty, and love, with a richness of prose and excellence of characterization rare in a first-time author,” according to its starred Kirkus review, and tells of an “iridescent friendship and its unfathomable loss,” according to NYT bestselling author Jodi Lynn Anderson. The novel also garnered the attention of Portland’s Center for Grieving Children, who will join Cameron (along with The Yellow Tulip Project) to discuss suicide prevention and mental health stigma on Wednesday.  The event is free for the public but registration is required.

In the new year, Thomas Memorial Library will also host Cameron and feature The Stepping Off Place as a community read, with follow-up virtual discussions with NAMI, Cameron, and The Yellow Tulip Project. A plan for collaboration with CEHS is also in the works, with the support of CEEF. Stay tuned for more information on that!